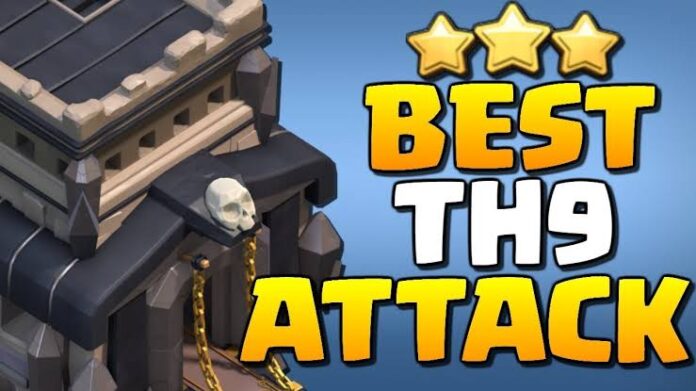 Clash of Clans is an online multiplayer strategy game. This game has been launched by SuperCell company. In this game, people attack each other’s town halls and loot. People upgrade their town by looted money and oil, so that other players cannot attack their town. In this game players win trophies by attacking other’s town. As the player’s trophy increases, his ranking in the leader board also increases.

People like Clash of Clans game very much. People wait 30 days to level up and upgrade the town hall in this game. You need to have patience to play this game. If you are going to attack someone else’s base then you need to have a strategy first. By proper strategy you can get 3 star in any level town.

In this strategy you have to keep main dragons in army troops. Along with that you will need 6 Lightning Spells, 20 Goblins, 2 Body Guards, 1 Balloon. If you have this army then you can easily win the 9 level town hall.

First of all you have to put balloons instead of rockets. When the ballons break the rocket on one side, you have to release 5 dragons from that side. Now you have to place 5 dragons on the other side. 2 body guards are supposed to be behind him to protect him when these dragons are wreaking havoc. Now you have to land 20 goblins in the ground. Goblins will soon start collecting gold and oil. In no time your dragons will destroy 100% and you will get 3 stars.

Now single balloons are to be placed towards the side of the rocket. Archers and lava hounds are to be placed behind the rocket to destroy it soon. Rockets reduce the health of ballons very quickly. So it is necessary to destroy the rocket first. After the rocket is destroyed you have to put the inflated ballons together on the ground. Along with Balloons you also have to use Poison Spell.

From the name of Mass Dragons Attack Strategie you must have got an idea who will be the main in this Strategie. You have to prepare 12 Dragons, 2 Balloons, 2 Wizards, 5 Archers, 1 Bomber, and 2 Rage Spells. In this attack, try to destroy the Rocket and Archer first.

In this th9 Attack Strategy you have to use Witches the most. You should include 2 Golems, 2 Heal Spells, 2 Poison Spells, 2 Golems, 5 Wizards, 3 Wall Breakers, 1 Jump Spells, and 1 Rage Spell in your army.

First you have to place golems, wizards, and wall breakers from the top and bottom sides. When these troops break the first layer of the wall, 5 Witches are to be placed from both sides. You have to use Rage spell on Witches. Now your army will slowly move towards the center. In this attack you have to make sure that your troops stay away from the traps. Finally you have to use Jump Spells. By the end of the match you will destroy the entire town hall/village/base and you will get 3 stars.